I really debated whether to write this post for this blog, but with the news Tamara is headed back to DAYS OF OUR LIVES as Ava Vitali I felt the need to do this. The debate has again reared its ugly head about what actually happened between Ava and Steve Johnson played by Stephen Nichols on their journey to Indonesia to search for their son, Tripp (Lucas Adams). As everyone knows part of Ava’s demands for telling Steve where Kayla (Mary Beth Evans) was included a demand for Steve to sleep with her. Some have called that demand rape as according to them Steve had no alternative but acquiesce to Ava’s demands, therefore it is rape. Based on a letter published in the 10/12/2020 Edition of Soap Opera Digest, which can be found on the main site in this post: My Sentiments Exactly …... In case you don’t want to click on the link, I’ll post here.

I’m just writing about a recent article in your magazine. I’m very, very, ecstatic that Ava is returning to DAYS. I know when she comes to the show that DAYS is can’t-miss! Tamara Braun is an amazing actress anyway, and with her and Stephen Nichols [Steve] in scenes together, those two have so much chemistry, it’s on fire. Steve can be telling her he hates her, but they still have it, for days.

According to the author of the letter, Shelley J. in Vancouver, British Columbia, she didn’t see what happened as rape, rather damn good chemistry between Tamara and Stephen. And I agree with her when she says that “Steve can be telling her he hates, but they still have it.” The point here is the vast legion of Stayla (Steve + Kayla) fans with a devout loyalty to their couple contend even today what happened between Ava and Steve was indeed rape. Some say sex with coercion is also rape. So my question is if Steve was raped, why did he assist in the removal of his own clothes when he jumped on the bed with Ava? The clip can be found below where you can decide if it was rape or coercion, or something else.

Yes, Steve tried to forestall the ‘event’, but the point is when he finally gave in, he did so willingly. He grabbed Ava’s head between his hands and was rough with her in terms of shoving her on the bed. She then pulls him to her and here is where Steve stops being a victim and becomes complicit in the act. There is no ambiguity about it. Some might say the aftermath showed him with revulsion in what he’d done, particularly in the way he rebuffed Ava when he made her call Joey (James Lastovic) to tell him where Kayla was. He still wasn’t fighting her, or even not actively taking part as in the STARz time tripping show Outlander and its hero Jamie Fraser played by actor Sam Heughan at the hands of the villain Black Jack Randall played by Tobias Menzies.

During the course of the first season Jamie told Claire (Caitriona Balfe) about how Black Jack almost pursued him. First encountering him at the Fraser home of Lallybroch where Black Jack and his English Redcoats came to the homestead to take their supplies and in the process Black Jack takes his liberties with Jenny Fraser (Laura Donnelly), Jamie’s sister. When Jamie comes to Jenny’s aid he becomes an idee fixe for Black Jack in Jamie’s refusal to allow Black Jack to rape his sister. Black Jack has Jamie strung up and whips him with his riding crop in front of Jenny before Black Jack cold cocks Jamie, then taking Jenny inside to have his way, ending in Jenny emasculating Jack and Jack unable to complete the task.. 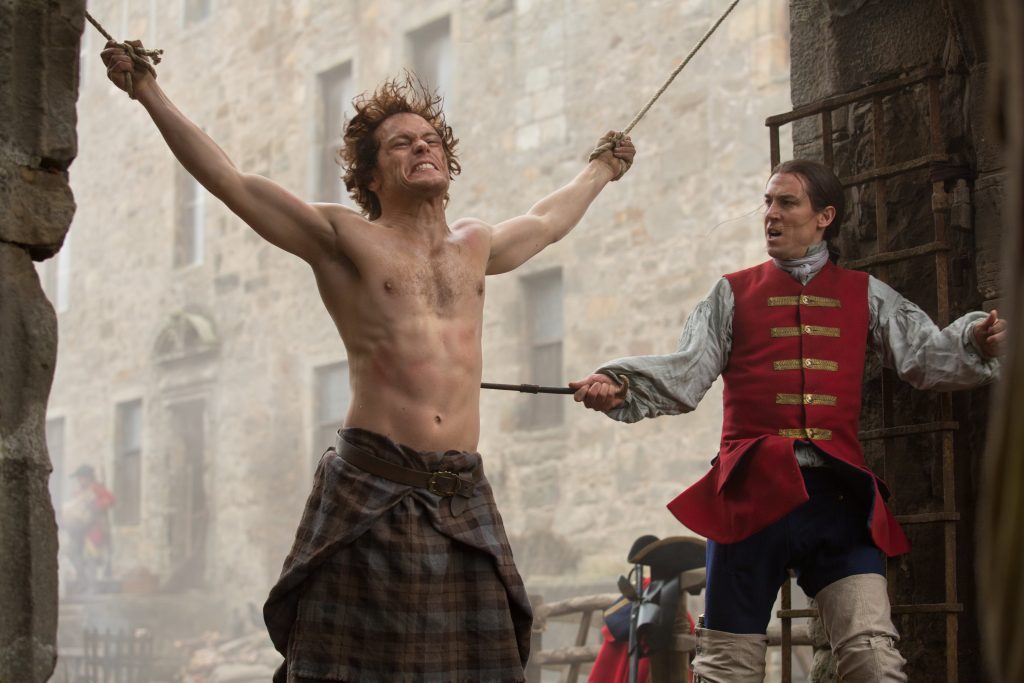 Jamie was secured by Jack into a wagon and taken unconscious to Fort William where Jamie was subjected to one hundred lashes on his back resulting in severe scaring. When Jack arrives at Fort William where he is the garrison commander, after Jamie rebukes his sexual advances Jack has him lashed a further one hundred times, only this time Jack will do the lashing. 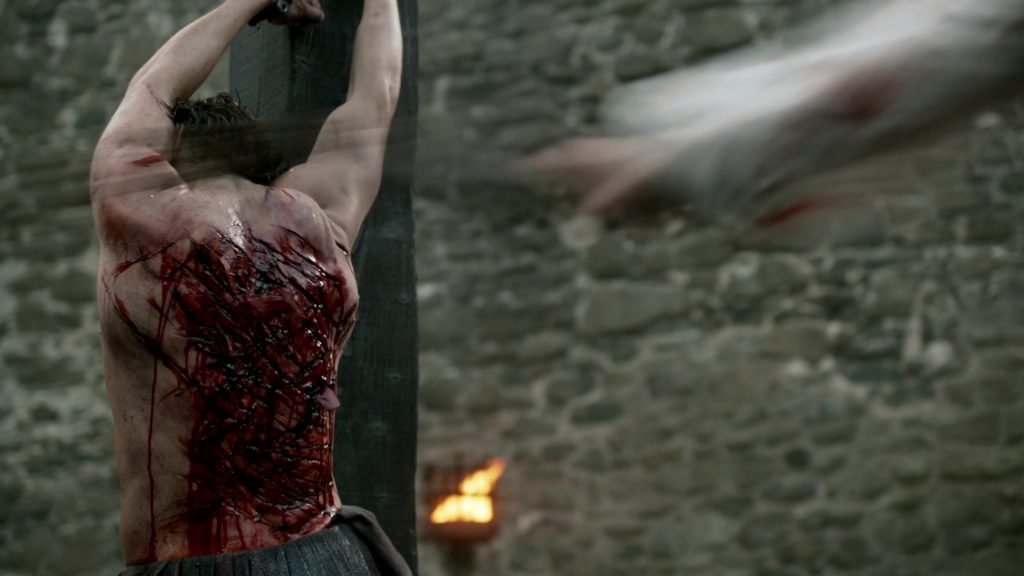 Jamie is rescued after this and thus begins Jack’s pursuit of Jamie.

In the episode thirteen called The Watch, Jamie is taken prisoner by the Redcoats and he is taken to Wentworth Prison where he is to be hung by the neck. Jamie is up on the gibbet when he is saved from the noose by none other than Black Jack Randall. Randall has Jamie taken to a cell down in the belly of the prison where Jack plans on forcing Jamie to acquiesce to his demands before Jack gives Jamie the gift of choosing his preferred method of death. Jamie and Jack engage in a slick cat-and-mouse game where Jack tries to break Jamie and Jamie plays a form of chess with Jack. Jamie is by all intents and purposes winning the mental battle, when Jack slams Jamie’s hand with a steel hammer. Jamie’s hand is crippled as Jack attempts his first try at seduction. Realizing his base mentality is breaking through, Jack decides to leave Jamie alone and in pain and leaves the cell. Enter Claire.

Claire finds Jamie in his cell his hand a mess and his leg chained to the wall. Claire attempts to rescue Jamie, but is thwarted by Black Jack’s return. Here is the scene as it plays out.

It’s clear Jamie’s leg is chained to a wall, therefore Claire can’t get him free and Jamie just can’t roam free. Unlike Steve who had full control of his actions in the ability to walk out the door on Ava at any time. Now some would say the same situation presented itself in Jamie wanting to protect Claire as Steve wanted to protect Kayla, but the situations are not the same. Unlike Jamie, Steve had other options other than giving into Ava. And the situations back in the 1740s wasn’t the same as they are in the 2010s when the scene with Steve and Ava took place. However, the point here is that Steve did have other options. Those options are as I’ve said about a billion times on other message boards, ones of which I have been summarily banned.

So to the nature of rape. Let’s look at what happened to Jamie. Warning, it is brutal and if you’re easily stunned by such content, do not watch.

It’s clear Jamie did not cooperate with Black Jack. Not once. It should be noted that in between part one and two Jamie had undergone hours of torture and further degradation from Jack. In the first part Jamie who said Jack could have him, didn’t make it easy for Jack. In part one where Jack told him “kissing him was like a kissing a corpse” Jamie said plainly he would promised he wouldn’t resist, not comply. So Jamie wasn’t going to cooperate with Jack and only did in the second part after hours of torture. So let’s look again at Ava and Steve’s scene.

Where is Steve resisting Ava? In the beginning, yes, but after they move over to the bed that’s where any and all notion of rape or forced coercion dies. Also sitting in the bed afterwards while Ava made the call still constitutes consent. In part three of the scene with Jamie and Jack, Jaime clearly wants Jack to fulfill the “debt” and kill him as was agreed. Jamie looks beaten and battered and clearly wishing for death. Steve got up, got dressed, and simply left. Transaction completed. There was no such transaction with Jamie and Jack. It was clear Jamie was to be Jack’s plaything. Steve not so much.

In conclusion this “rape” scene was no rape scene with Steve, certainly not compared to what Jamie went through. And Ava is no Jack Randall. Ava was written completely out of character to who she was at the end of Tamara’s run in 2008. That was the fault of the writing, that also clearly fudged on this scene where this “rape” was supposed to be happening to him. I understand the Steve and Kayla fans trying to find something to cling to for their couple, but to openly state Steve was raped while trying to protect Kayla, in comparison to what happened to Jamie who clearly was raped to protect Claire is simply not there. Apples and oranges. Steve clearly sleeping with Ava was transactional. Certainly not the same as Jack’s rape of Jamie. So please let’s not call what happened to Steve something it’s not. 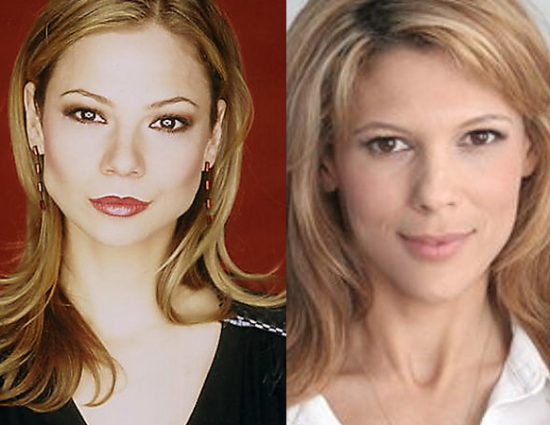 NOTE: This post is a copy over from one I made on the main site. I took it offline due to the negative nature of it and that I felt it didn't or shouldn't be there. Reposted here due... 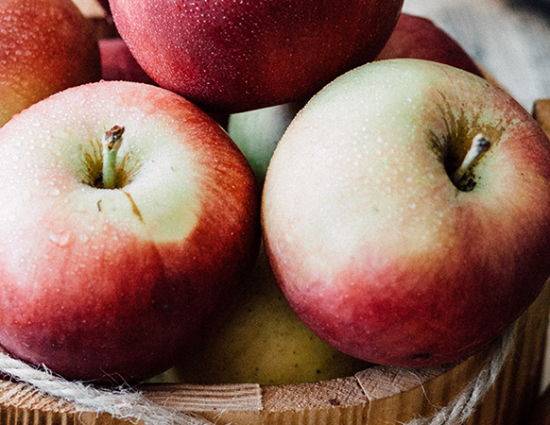 I thought I'd use this forum as a means of expressing how I feel about how Tamara was treated on her most recent return to her home soap GENERAL HOSPITAL. I had at one point posted somethings to the...